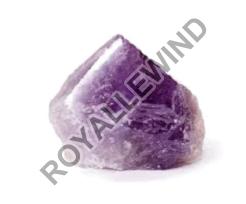 Royallewind Provides You a 100% Original Amethyst Gemstone. Amethyst gets its name from two Greek words “A” means ‘not’ and “Methustos” means’ intoxicated’. This gemstone is popular with the name Jamunia in India. This gemstone is mainly mined in Sri Lanka, Africa, Australia, Uruguay, India, Brazil and South America.

Since the Roman and Greek times, a gemstone was believed to protect its wearer from drunkenness. This stone was carved into drinking vessels so that it would prevent intoxication. With the advancement of time, Astrologers and Gemologists researched and found that this precious gemstone not only prevented intoxication but also benefited the wearer in a number of ways. This gem was a purple colored Amethyst, from the family of Quartz.
Jamuniya or Amethyst is known as the Birthstone of the month of February and Zodiac stone for the Constellation of Pisces.

Being ruled by the planet Uranus, this stone is believed to protect and calm the mind of its wearer. It increases the power to concentrate and hence is useful for the people engaged in research work like scientists and mathematicians.

Representing the two Chakras of one’s spiritual body “The Crown Chakra” and “Third-Eye Chakra”, an Amethyst converts the negative energies into the positive ones and protects the wearer from Psychic attacks.

Also called as the lover’s gemstone, Jamuniya signifies true love & faithfulness and can be presented as a Wedding Anniversary gift for the 4th or 6th year of marriage to maintain healthy relationships.

With such incredible Amethyst properties to ease the nervous system and calming the mind, Amethyst is one of the boons presented by the Mother Earth to the human.